Artisan French Bread In The Heart of Southern Oregon 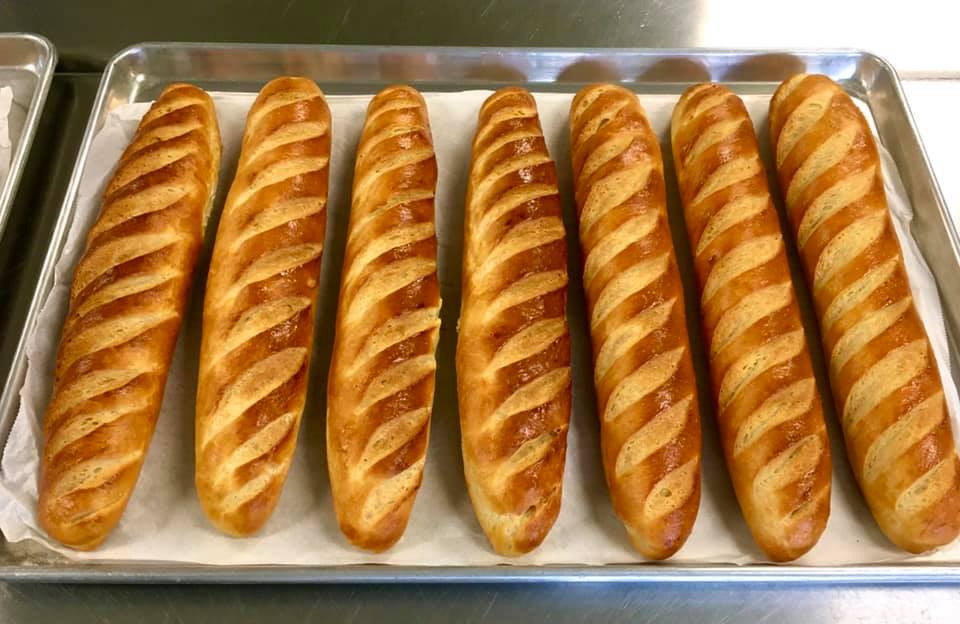 The art of bread baking is a passion Philippe Garcia has pursued for two decades. Over the past few years, he has brought the flavors of authentic French bread to the Rogue Valley, delighting bread lovers of all ages.

His homemade breads are a balance of simplicity and elegance, and left a lasting impression on his customers, who keep coming back for more.

After graduating from the INBP (National Institute of Bread and Pastry) as an artisan bread baker in Rouen, France, Philippe ran his own Boulangerie (bakery) in his home city of Lyon from 2000 to 2008.

“Then my family and I moved to Northern California,” said Philippe. While there, he worked for a few local artisan bakeries.

After relocating to Portland for a time, Philippe and his family moved to the Rogue Valley in 2017. His wife’s work brought them to Ashland, when she started working at Southern Oregon University. And they have been enjoying the Rogue Valley lifestyle ever since.

In addition to selling his homemade bread directly to customers, Philippe also works part-time at the Market of Choice.

“From there I met Melodie, who owns The Oregon Cheese Cave,” explained Philippe.

Fate brought these two entrepreneurs together for what would become a powerhouse of artisan food. “Melodie was starting her own business and offered to let me sell my bread there on the weekends. Which is great because bread and cheese is the perfect combination!” he added.

Through that partnership, people got to know Philippe, his products, and his passion for bread.

Once the pandemic happened, Philippe, like many other entrepreneurs, changed how he was doing things.

“I asked people to email me their orders and I did some home deliveries,” he said.

Many of Philippe’s clients continue to send their orders via email, but others visit him at The Oregon Cheese Cave, or at his commercial kitchen in Ashland, where he spends the weekends baking.

“People visit me to pick up orders, and others drop in to buy bread,” he said.

Recently, Philippe was presented with an amazing opportunity, when his bread was noticed by the owner of Rogue Creamery, David Gremmels.

“David really liked my baguettes and asked me to bring some samples to the store,” Philippe said. “And now I’ve been officially supplying the Creamery with my bread since January!”

A Slice Above The Rest

Philippe brings the heart of France to the Rogue Valley through his breads, showcasing classical French recipes and flavors.

“I have a country bread, multi-grain bread, baguettes and brioche. These are the breads you’d find in every French bakery,” he said.

Philippe uses a handful of beloved French recipes, but one of his favorites is brioche, because he can make many types of rolls from it.

He also plays around with his other core bread recipes and turns them into a variety of different products.

“From the four kinds of bread I bake, I can make different shapes — including a baguette, boule, sandwich loaf or rolls,” said Philippe. “People appreciate my bread and the different types I make from those four main recipes.”

Philippe hopes to eventually turn his passion into a full-time operation. He also has plans to share his knowledge with the community through different mediums.

Once there can be large group gatherings again, Philippe wants to hold a bread baking class.

“I’ve been baking for about 20 years and I’d like to give my knowledge to both home bakers and professionals,” he said.

When Philippe started making bread, his journey began in his home kitchen. “I learned at home before renting a commercial kitchen. So I am really interested in passing those tricks down to others.”

Overall, Philippe has loved his time in Southern Oregon, and received a lot of support from the community.

“I am happy to be part of the Rogue Valley community because you get to know people: cheese makers, wine makers and people with interesting skills. It’s very motivating to be part of this community,” he said.