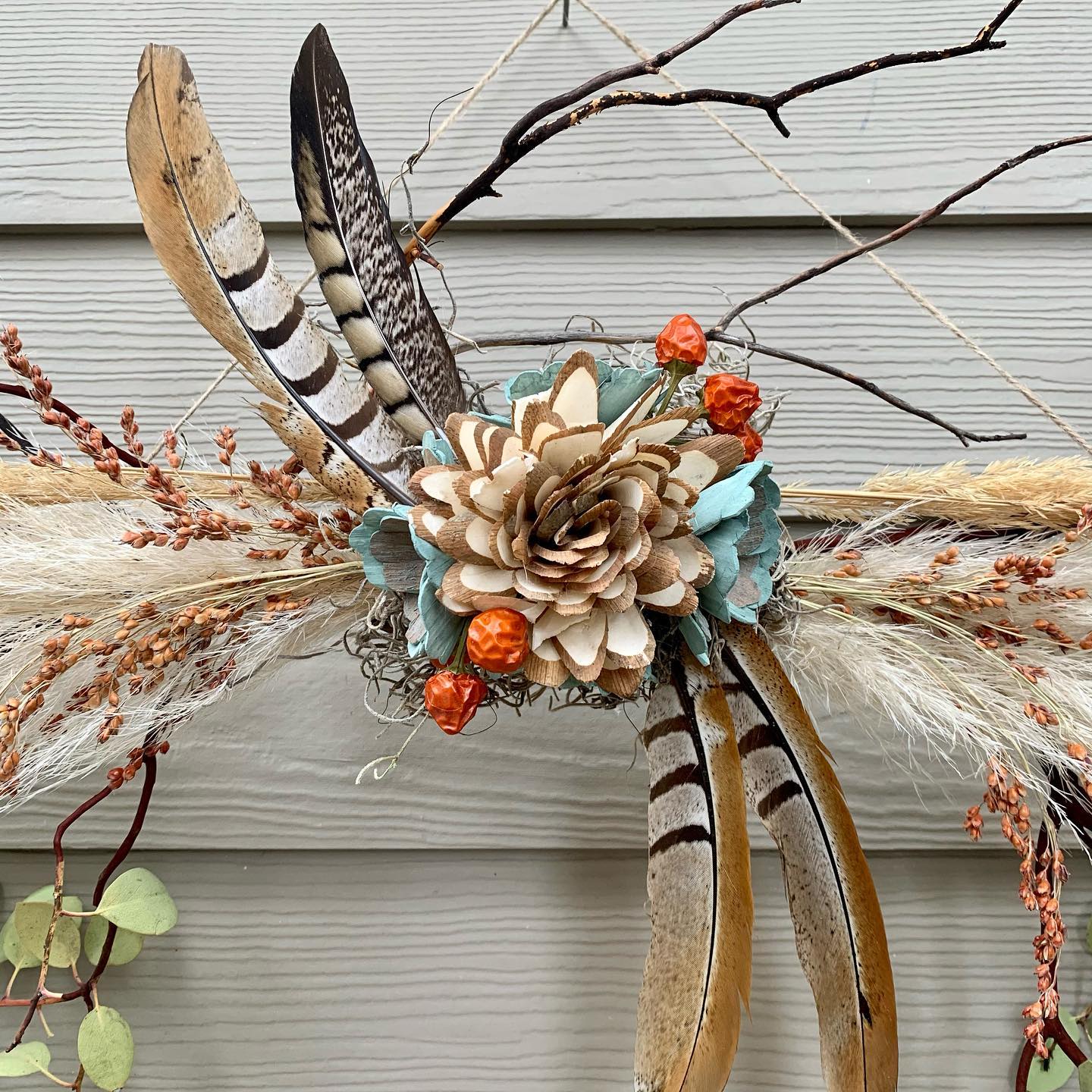 With a lifelong love of flowers, it was only a matter of time before Deanna Mulaskey brought her passion for plants to the Rogue Valley.

Before opening Bee Sweet Blooms, Deanna worked in flower shops for nearly ten years. But like a flower growing from a seed to a beautiful blossom, her journey has been full of changes and new opportunities.

Originally from the Bend-Redmond area, one of Deanna’s first jobs was working in a greenhouse. “I started in the greenhouse and worked my way to the shop, where I was trained by the designer.”

She moved to the Rogue Valley in 2007, and received her degree from Southern Oregon University. As she pursued other interests, Deanna thought she’d said goodbye to flowers.

“But even while I was at SOU, I still helped at the flower shops during the holidays. I didn’t want to lose that connection,” Deanna explained.

For many years Deanna never thought of starting her own business, but her mindset shifted in September 2020.

“We saw footage of our block on fire and it was a scary time. After returning to our house, I decided to start my own flower shop. It didn’t seem like as big of a risk as it did before.”

Additionally, Deanna felt it was important for her shop to be located in Phoenix. She wanted to bring her passion for flowers to the community, and raise awareness about local resources people could support. In October, she started working on her new business venture.

“I started in our garage and it was fun experimenting with different things,” she said.

For Deanna, it was also important to buy from local flower farmers as often as possible. In the floral industry, she said many flowers are flown in from other countries which may use pesticides or herbicides on the plants. That’s why she buys local products, shops seasonally and uses fresh flowers in her arrangements.

“Fortunately, we have a lot of organic flower farmers in Southern Oregon. I’ve gotten to know them over the years while working for other folks,” she said.

Additionally, Deanna’s experience working as a designer has taught her a variety of skills.

“I have a base of knowledge that’s not something you can find just anywhere. I wanted to use that experience and start the business because I felt like Phoenix could benefit from a flower shop,” she explained.

Bee Sweet Blooms offers premade and custom items. Deanna loves to test her creativity by putting pieces together with seasonal flowers, but is also open to special orders, or if people approach her with an idea for an arrangement. In her experience, many people are happy to use seasonal flowers once she explains what she purchases and why.

“Buying flowers is an emotional purchase,” she said. “It may be for a friend who got a new job, or for a baby shower. When someone tells me what the occasion is, I can suggest something that will work well and look beautiful.”

The past few months have been a whirlwind for Deanna and Bee Sweet Blooms, including moving to a new retail space in Phoenix.

“I’m so excited! I can’t believe it’s happening,” she said.

Her new shop is in the same building used by Pollinator Project Rogue Valley, located at 312 N. Main Street, Suite B, in Phoenix.

Deanna’s discovery of the building started months ago when she volunteered at the fire relief center. That’s where she met Kristina Lefever, president of the Pollinator Project Rogue Valley.

“We just hit it off,” she explained. “Eventually, Kristina said they wanted to reduce costs and suggested we split the space so I could have a place for my shop. It was a great idea and beneficial for both of us.”

As a budding business, Deanna said the response and support from the community has been really positive.

Her initial customers were family and friends, but then people that she had never met before were buying floral arrangements. “They really appreciated the service I was offering,” she said.

Deanna also partnered with Melodie Picard from The Oregon Cheese Cave, who invited her to do a pop up at her store. “Because of that exposure, people knew I existed!”

Flowers have always been a central part of Deanna’s life, and once again, she reflected on the impact of the Almeda Fire. “I remember traveling back and forth after the fire. Someone had lined the street with buckets and buckets of sunflowers. It was a beautiful sight and incredibly touching.”

But most of all, Deanna believes in the ability of flowers to heal and spread joy. “And I want to bring that new life and hope to Phoenix,” she said.